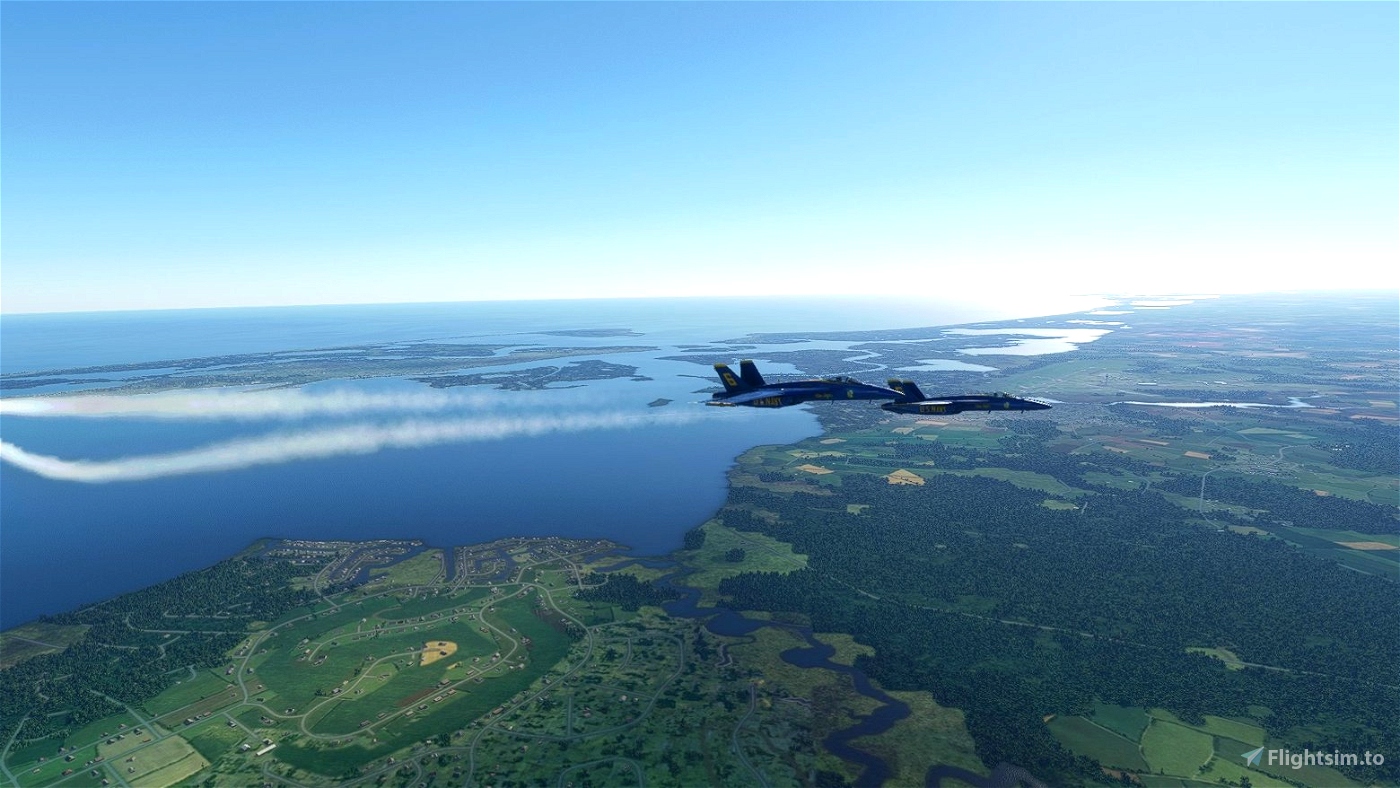 Several days ago we got the first military jet for Microsoft Flight Simulator by its original developer. It's fun but feels unfinished. Let's give it some love and raise the level of quality!

Next will be fully working catapult - in cooperation with Photosbykev and 270inc we are making simple aircraft carrier with animated crew and complicated operations.

Then turn of the tailhook and arrestors again - precise hook-cable collision calculation will make many of you happy (or angry).

And finally, the reason for the project name - AA radar with gun assistant - combat training simulation with accurate ballistics calculator. Can you shoot down someone? We'll see.

Compatibility with other mods

But remember that modded aircraft not compatible with any of official events - Landing Challenges, Races etc. If you wish to participate, remove mod from Community folder temporarely.

Model XML files mostly changes, some minor CFG updates applied, additional WASM script for carrier operations. No model or textures improvements planned, but may be possible in the future.

How to adjust or disable some effects

To disable exhaust effect for example, open FA18E_FX.xml in text editor (like Notepad or Notepad++) and find EXHAUST_FAR. Below replace

so long trail of exhaust will never appear (most FPS consuming).

To disable aerobatics smoke (both for you and other players) replace

If you are familiar with XML/RPM conding you can adjust effect appearance modifiers. They are stored inside of and control the size/transparecy of the effects.

Sadly, we still have no HUMIDITY sim variable so vortices/vapor modifiers uses only temperature, precipitations level and fact of your presence inside of clouds, wich makes they appearance very inaccurate.

After you set throttle lever(s) to 100% afterburner will be enabled automatically. Ensure your joystick calibrated properly, just in case it never reach 100%.

As usual, when thorttle level less than 80% - afterburner goes out.

If you want to disable this feature, open in text editor file Community\asobo-aircraft-fa18e-warrior\SimObjects\Airplanes\Asobo_FA18E\model\FA18E_cockpit.xml and find near to bottom of document these lines:

Remove both, restart the game.

For unknown reason, sometimes afterburner effect does not appear. In this case press afterburner shortkey once, effect should appear properly during the flight.

How to use catapult

How to use arresting gear

You want more? Check out our Patreon!

Early access, demo of payware products, development reviews and tutorials! Quite empty there at the moment but we'll work on it really soon. 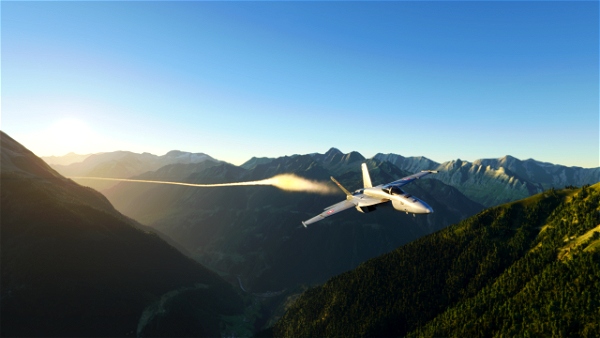 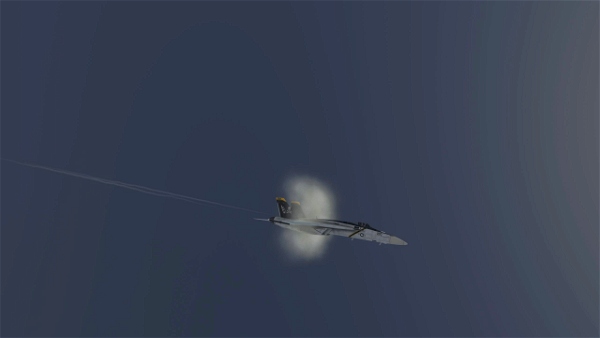 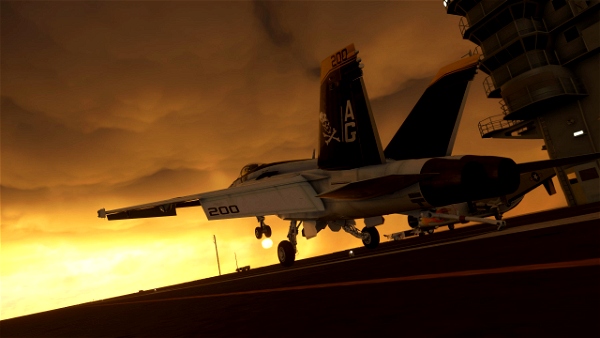 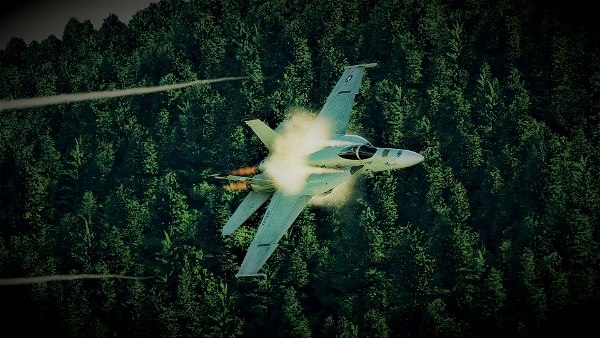 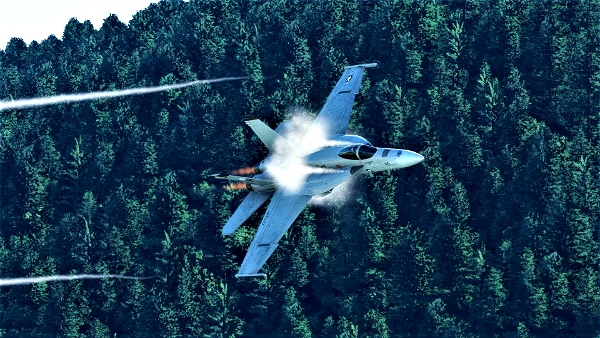 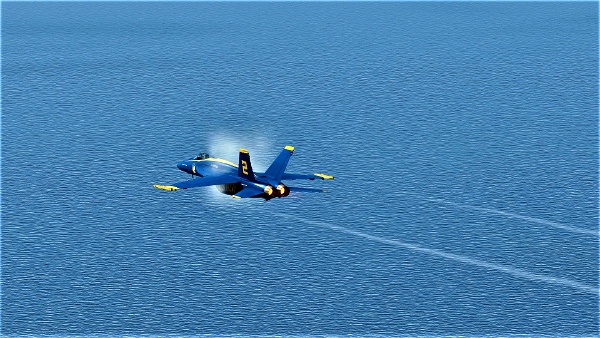 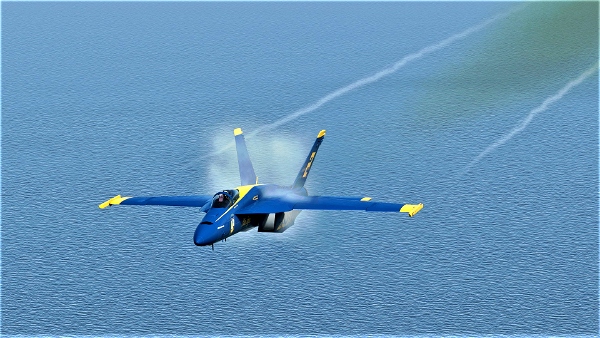 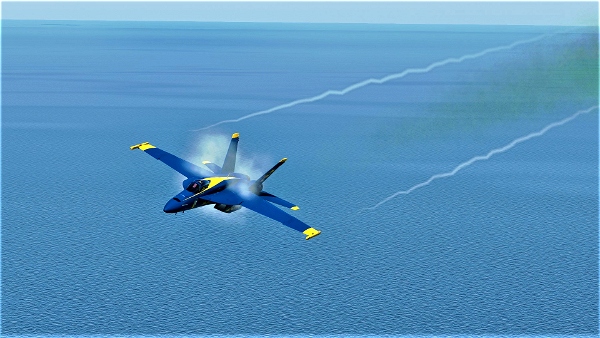 it didn't work, when I was on mach 1 the sonic boom doesn't appear

how come the vapor cone does not work when I hit mach 1? IS it some button I have to press?

also the smoke is green

No, it appear once you reached 1 mach.

Smoke can be green only if you have a conflict with some other smokes mod.

Effects appearance conditions will be revised but only after main tasks are finished.

correction, lost auto afterburner in both versions 2 and 2.1. Odd worked perfectly yesterday. thanks

Any chance your joystick throttle not reach 100% level? You can check it on settings page, white bar should reach the edge when you set throttle on maximum

Sorry to bother you...disconect/reconect my Logitech 16000, ok now. Should have tried this before. Your wok is a piece of art. Asobo should learn from people like you.

Excellent mod! Achieved a trap after a couple of tries.

Problem: set up for launch, see the launch bar, go full throttle, start down the deck and then crash as I cross the downturn. It says I crashed into the water although I never actually left the deck. Am I doing something wrong? Thanks!

Maybe because of overload? Strange, I have applied catapult acceleration under the G force limit, maybe should test it again.

Turn off crashes in your sim settings. And also assisted landing and takeoff if it's turned on.

Exuse me but what is "PBK carrier group"? I have the Studd carriers so is it a Scenery?

It is aircraft carrier under development by Photosbykev, will be released soon and compatible with this mod (crew will give you signals during taxiing and launching process). Studd carriers will be updated as well.

Any chance we can get this thing to be able to be seen as a regular F/A-18 and vice versa? I was flying with a friend and said the Aircraft code came up at "F18S" and we couldn't see each other's aircraft in the right model; both showing up as beechcrafts.

can you provide more details about your flight. is your friend had mode installed? if not, was he on PC as well, or XBox?

It might be fixed, but he's on PC as well and doesn't have the mod.

the latest version does not help the fact that the others (xbox players) still see us in A320 ... 😞 I do not even understand by copying the original aircraft.cfg instead of yours it does not work better. ..

That's unfortunate. I'm out of ideas, but maybe solution exists.

i hope, really i understand ...

The sim already has a launch bar binding in the control options. Can you some how tie it to that? Currently it doesn't work. The Tail hook binding works.

Tried it on day 1 but even after launchbar config values from FSX were added this hotkey does not affect launchbar SimVar values (which used to animate launchbar and trigger launch process). I am pretty sure it works but can't find proper conditions to unlock it. Let me know if some of you will figure it out.

somehow, yes - you can take off and land. you just need to choose proper position where to toggle launchbar switch, and you can land where you want as no strings calculations happen yet.

soon they will be fully compatible - with crew and strings.

Ok, thank you very much. I think it is the best add on in flightsim.to

I don't know why but it continues to Sonic boom once you go faster than the speed of sound, it never stops.

you mean vapor cone stay visible for a long time? or some other effect

No the "breaking the sound barrier" sound aka sonic boom happens at a certain speed, after that speed you continue to hear that "boom", over and over.

Are you in the same view when you keep hearing the Sonic boom or is it every time you change view?

That is you are in outside view looking at the plane from the side, you change view to normal flying behind the plane then boom?

If so is that not the same as going from ahead of the sound wave to behind it every time you do that?

rename aircraft folder into fa18w maybe it'll help. if not - I can give you further instructions.

Thanks it worked, keep up the work

I Love it. The only problom I see is that the vapor effects is kinda hard to "trigger" and the aoa only works when tailhook is down

AOA indication fixed in 2.1 isn't it? works when gears or tailhook extracted

Oh nvm, I guess I had 2.0 installed. Thank you for your work.

Does anyone know how to shutdown the engines?

You need to hover your mouse over the throttle (Any one) when its at 0% throttle, then you hold left click on the throttle and then click right click. By doing this it will shut off the fuel to that engine then do the same thing to the other throttle to turn off both engines.

Ok, i will try it now

Thanks, It works....do you know if we can add a destination airport while we are flying? Lets say i takeoff just for fun then while flying i decide to land in an airport 100nm away, is it possible while in the air to add the airport code on the waypoint?

Well you 100% could but its not as easy as when your in the menu, you will need to learn how to use the MFD (The screens infront of you) and know the cords of each waypoint. So you cant change your course while in a game with the menu (The easy way) At least of now.

Can you fix the taxi and landing light? we like to fly at night but when taxing at night there is no illumination Infront, is HARD to see when taxing...

Fuel keeps running out but I still have fuel in wings, whats up with that ? any idea?

yeah I've heard about fuel valves issue in stock version. will check it out.

Amazing! Thank you so much, This project is kick ass !

Do you plan to include external payload like fuel tanks and missiles?

maybe, but not yet. carrier ops and radar first.

i would love to see a functioning gun or aim-9s!

interestingly, came across this video on shooting missiles in MSFS, kinda: https://www.youtube.com/watch?v=NVBPbRWu32s

First try on aircraft carrier, damn thx u so much the F18 look really better !